Maybe I'm naive but do we really need more tracks for Chicago HSR? Is it a capacity issue?

I have to say if the train needs to be non-high speed in the city, I'm fine with that if it means we need to spend less public dollars re-establishing a consistent passenger rail link between here and Chicago.

Rereading that Streets.mn post mspDan just linked to (great find, and welcome to the forums!), it looks like it's not so much that HSR would need a dedicated platform as that, eventually, the station would need to expand from it's current one platform/two track configuration to two platforms and four tracks to handle all the trains they thought might happen (Northstar, Zip Rail, NLX, Chicago HSR, probably some more commuter lines if we're suddenly getting piles of passenger rail money from somewhere). I think Mulad still reads the forums, he might have some more insight.
Joey Senkyr
joey.senkyr@outlook.com 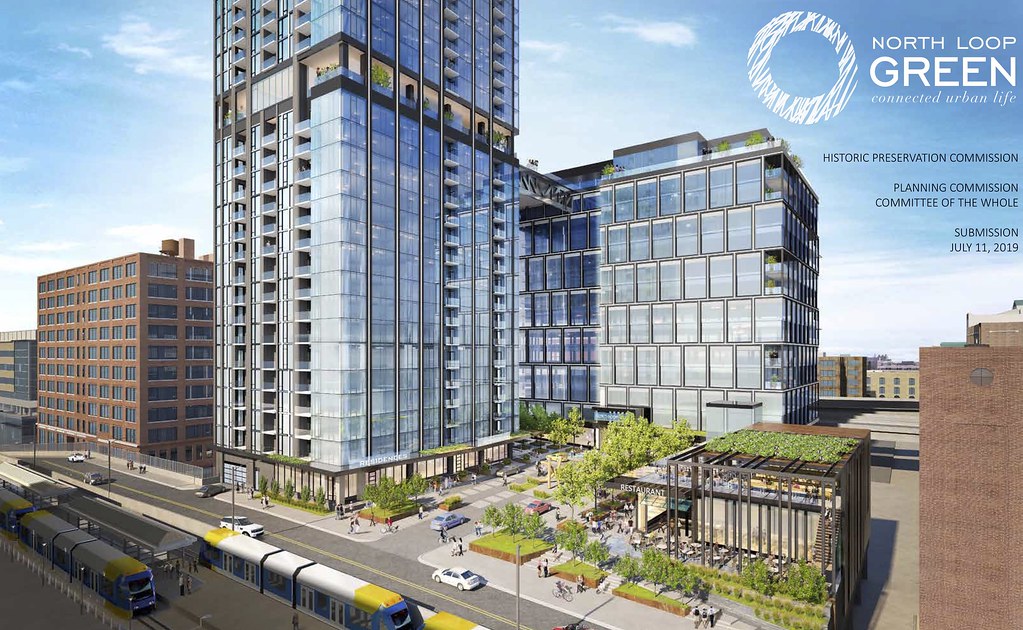 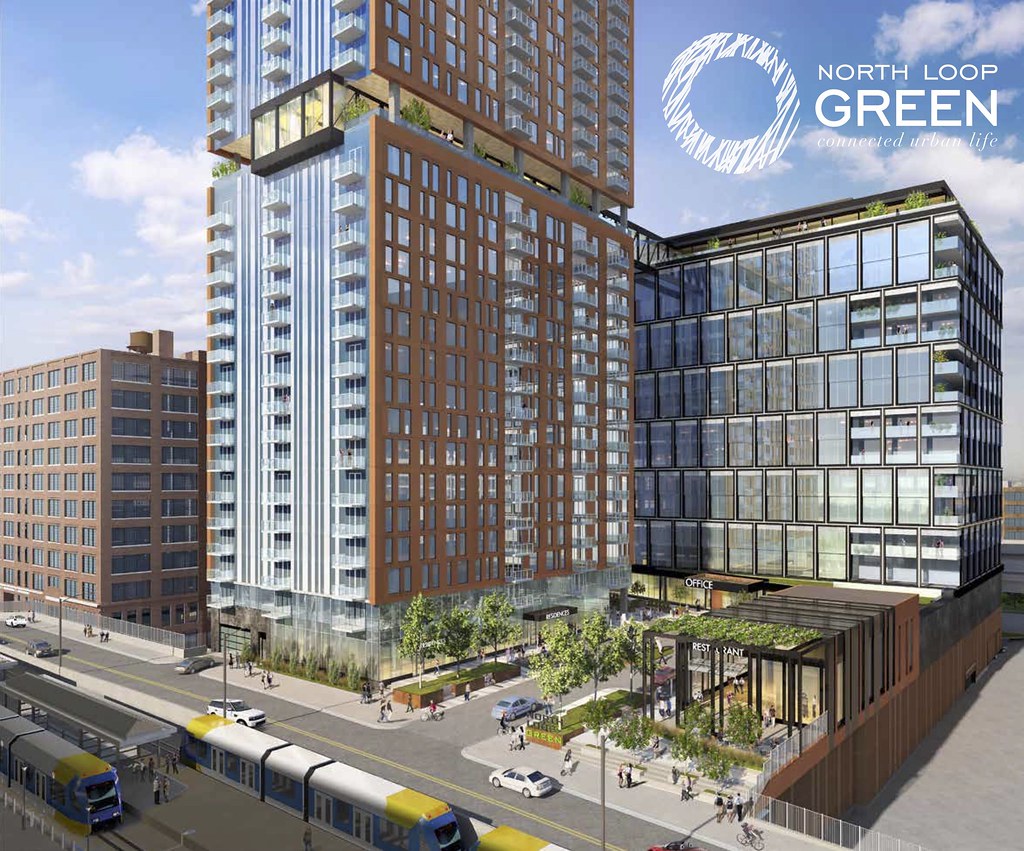 New renderings out showing updated cladding materials for the tower. I worry this is starting to look like Rafter (or Nic on Fifth, or 365, for that matter) with drab matte paneling. In this case, it's trying to look like brick to fit in with the North Loop, but I think that can easily come off as cheap looking. We don't really have a true glass residential tower in Minneapolis and I was looking forward to that with this project. It's hard to do glass wrong.

A couple of updates I really like. The sky terrace bisecting the residential tower is really interesting visually. The corner cut out on the north side really breaks up the monotony of the box shape. I think overall a really solid design. I like the solid metal addition, I hope it's good quality material as well. But it makes the glass and metal sections look really sleek. I can see lots of retail doing well here and it really connecting this area to downtown.

This is sort of a textbook example of why nice renderings can cause some problems.

There are a couple renderings in the packet that make the metal cladding look like cor-ten steel, which I think would be quite attractive. There are also renderings like the one that Rhett shared above that make the metal cladding look like vomit-colored precast. The packet actually suggests that they may not have made a decision on this, since it refers to "precast or metal panel" at multiple points.

I would probably prefer that they scrap the cladding entirely and go back to glass, which seems a much safer bet to me and would provide a really nice contrast with the North Loop architectural language. Instead they've clearly opted to try to echo that language, but it's a 35 story building, you're going to standout regardless, so why not stand out in terms of materials as well?

Hoping the CoW and developer come back to their senses on this, but insisting on a weathering steel instead of vomit-orange precast would be a fine option as well. As for the other changes, I guess the only one that bothers me is the move to protruding balconies instead of inset balconies. It doesn't look as nice in my book, and won't someone thing of the people who are scared of heights?

Well note, though, that the renderings say metal *or precast.* Which isn't necessarily an improvement...but is maybe cheaper? Unless we're talking about metal elsewhere on the building.

Given the fact that this is an ESG design I have a certain dread that the panels in the most recent renders are indeed precast. Hopefully they will abandon that possibility and either go for all glass or metal panels. This still has potential to be a good addition to the skyline.

The greatest disappointment I would say is that the far end of the rail station won't allow transit riders to cross the bike trail, climb the covered stairs and then pass under the high up connected terriance. It's a breathtakingly great transition from the enclosed train to the wide open space happening gradually. Maybe someday when the train station is expanded and has much more traffic they would consider opening that gate up. Right now I don't think it's very necessary however maybe in 10-20 years when the area has so much more density and the rail station actually has hourly trains rolling in and out.

Some day this could be such an amazing asset. The updated red stone looks god awful, I hope they don't mess up what was planned to looks so wonderful. Yet on a positive note, I think it's very bold they are putting a green space under the viaduct bridge instead of just parking. Overall a great project, even if they cheap out with a little red stone crap. Still will be a great improvement. Although I bet those rents will be 2000 for a tiny 1br. since it's under a "massive park" and "skyway connected" to an office tower, and "right on the LRT line" Yup those rents are gonna be insane!

Either rent here for a year, or buy a brand new toyota and live in it for a year, then throw it away and buy a new one

The world we live in.

Just wondering if there are any status updates on this project?
I know that is a bit of a vague question, but....

This is a very exciting development! Hopefully gets approval and can break ground as soon as possible...

Going before HPC on December 17th. Staff recommends approval we will see if the HPC goes along with that.

Clad in precast concrete. I hope the HPC lobbies again for cladding that matches T3, which I think was a rusted steel. But I will say that the renderings make it pretty clear that they have understood the need for texture on the exterior panels, because they show a lot of it. The office building continues to be really attractive, and the way that they have managed this complicated site is extremely impressive. I think the attention to detail in stitching together three distinct levels is remarkable work by ESG.

This is a truly exciting project. It's mixed use in a big way, bringing a ton of office, a ton of residential, and a pinch of retail and public space to a fill huge gap in the urban fabric. I think the interface with the Cedar Lake Trail is excellent. It would be nice if there were a better connection to the LRT and Northstar, but that's not the developer's fault, and access to those services is still quite easy.

Hoping to see this sail through approvals and break ground early next year.

There is a lot to like here - which I find particularly surprising with ESG at the helm. There are a lot of interesting elements to this proposal, And at first it seemed odd that they were not more cohesive, but giving the different elements distinct identities and character fits the neighborhood and prevents this from being an overwhelming presence. I remain concerned about the precast - no matter how much texture they give it - we don’t need a City Center West..

Unanimous HPC approval of a 400' tower in the North Loop. Wonders never cease.

Hopefully they're ready to bring it to the CPC in January.
Joey Senkyr
joey.senkyr@outlook.com

I was ready for grumbling and skepticism from this because of the height. Huh.

I am definitely excited for this one to be built. Another parking lot bites the dust!