Mercedes-Benz will have a pop-up space open later this month. The following article notes that it will open only for two months.

I hate that Great Wolf closed it's waterpark to public access, and now bitches about competing waterparks.

There will be a new M Health Fairview Clinic location at the mall, next to the (pharmacy-less) Walgreens:

A photo from when I saw it on Monday: 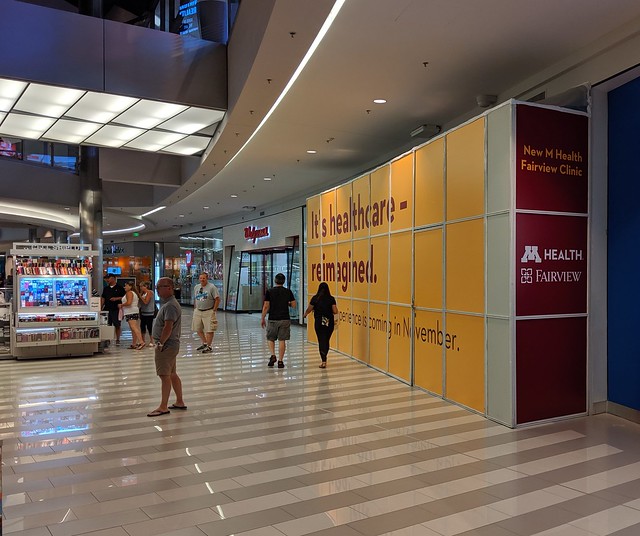 I'm sure Bloomington is real happy about that.

Apparently Forever 21 is on the fritz, which wouldn't be good for the mall.

Opening next year, Duck Donuts. It's opening in what would've been the Sweet Jesus space.

I think I know what language I'll be speaking in when ordering.

Chalk up another victim of the Curse of the 4th Floor - Smaaash closed last week.

I got the impression it was just a poorly run outfit. For example, they had a sponsorship agreement with the Vikings where the latter alleged that Smaaash reneged on some payments and it ended up going to court.

It seemed like the kind of place where people might go there once to try things out, but wouldn't necessarily draw repeat business.

The Mall of America is working on a plan for a 500- to 700-room hotel that would be attached to the massive water park that is nearing City Council approvals.

The plans for such a hotel came to light in documents related to the water park, which is scheduled for a Nov. 7 Planning Commission vote. The hotel would be sandwiched between the $250 million water park and a planned 1,500-stall parking ramp just north of the Mall of America.

This should really help bring additional life to the Mall.

Some more info about the water park and hotel in the Bloomington Port Authority meeting information from Oct 29. Looks like the developments after the waterpark are hotel and office, so unlikely to see any more retail built.

The Planning Commission discussion has been pushed back to Nov 21.

Some more info about the water park and hotel in the Bloomington Port Authority meeting information from Oct 29. Looks like the developments after the waterpark are hotel and office, so unlikely to see any more retail built.

The Planning Commission discussion has been pushed back to Nov 21.

Totally okay with this progression - which is likely more sustainable longer-term.
You do not have the required permissions to view the files attached to this post.

Where is the grand MOA rotunda on the North East section of the waterpark that could connect the existing MOA & water park to a even better outside mall that is 1st. and partly 2nd floor lining three streets that all lead back directly to the inside segment of the MOA. Something worth of the title MOA

Where shoppers can overlook the amazing streetlined retail greenways that also are office and hotel buildings above the 1st and 2nd floors. There could be retail stores lining the streets with restaurants and outdoor patios on the 2nd level. 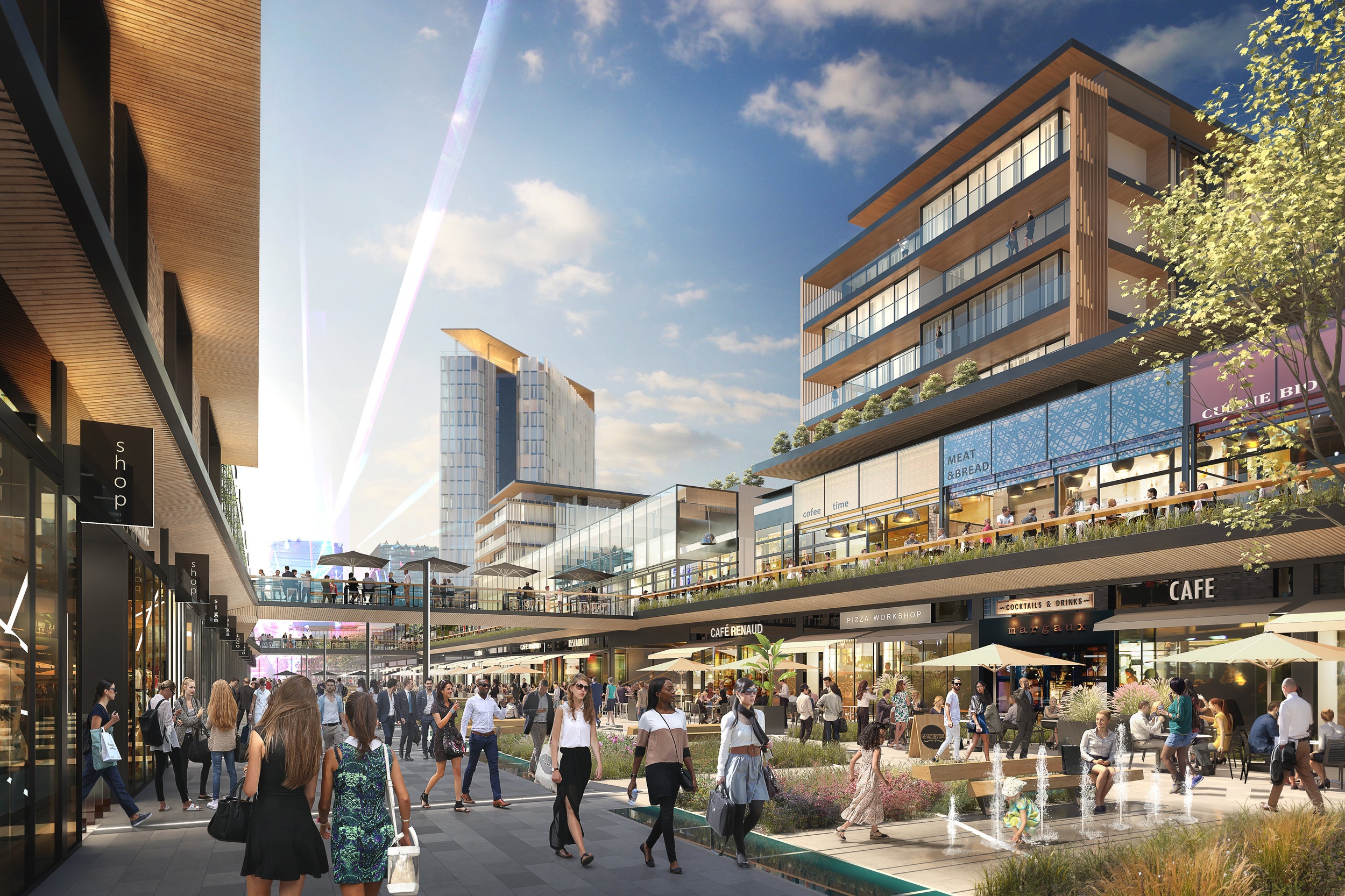 There is so much potential to have something so beautiful. Something that isn't so retail focused but still has retail that would complement and help make a great place for people to walk outdoors and to do what they come to do at the mall to shop! 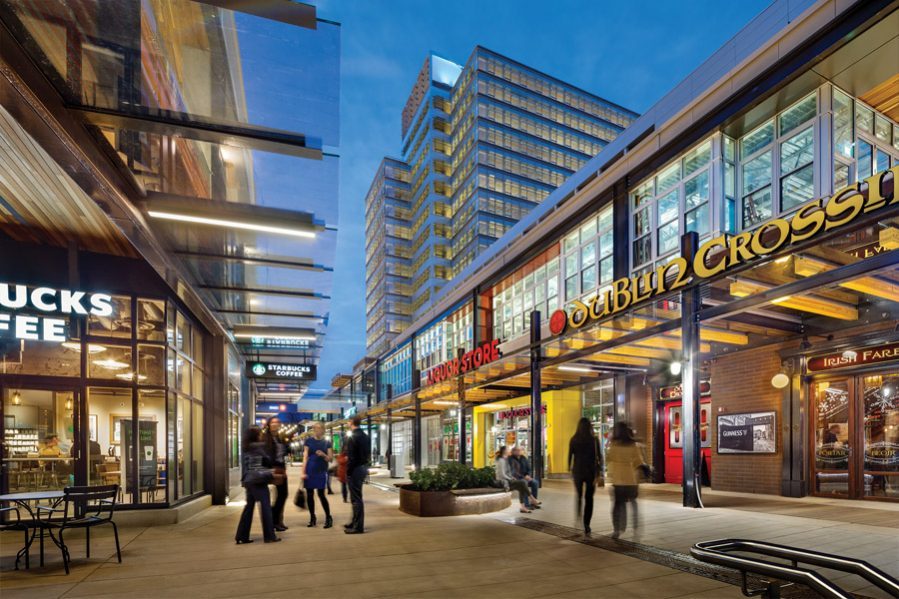 There is not even green rooftops. Those hotel rooms are going to be overlooking the awful MOA roof. It's embarrassing. I'm sure they didn't put to much thought into the segments past the water park, parking lot and the first major hotel. but they seriously need to come up with a better plan. Those streets they are suggesting don't look walkable, they don't look pedestrian friendly. Heck they don't seem to have much of a plan at all.

I blame American Dream New Jersey. Since they had to put up the MOA as collateral I wonder if that has got them to scared to be bold. If so I hope they come up with something better within a year as hopefully that is all it takes for them to start feeling more confident about their future again. Because this phase 2D seems really awful and not deserving of what the MOA has become. Plus the parking ramp isn't even wrapped with office space. That's a missed opportunity there too! Just awful.

I've taken a long, voluntary absence from posting here but I thought I'd step in and comment on this one.

* The last election results in Bloomington mean this is going through unless something unexpected pops out of left field. A lot of major agreements are to be signed this month.

* There's already way too much retail at MOA, or at least the proportion is wrong. The Mall owners think the future is more 50/50 retail vs entertainment like American Dream. MOA is more like 75/25 and this entire project is to change that balance closer to American Dream. Considering there's already vacant space in the mall proper I don't think it makes sense to build anything but a few shops selling snowcones and swimming suits to waterpark visitors.

* Those pictures suggest the worst of both worlds as far as convenience. Not being attached to the mall you have to get out in all kinds of weather to access them, but you can't park your car right in front of them either. No Mall tourist is going to go to a Victoria's Secret or Caribou outdoors here when you can go to one while indoors. And someone local is going to go to one that's more convenient.

* A plaza on the northeast side would be contingent on future plans for Sears, as well as having to deal with crossing Lindeau Lane. LL was already lowered on the north central side at great expense in order to build what will be the main north side plaza.

* Yes those hotels are crappy. But Disney World can rent crappy hotel rooms (that are no better than a Super 8 and you need to take a slow bus to the parks if you don't have a car) for outrageous prices just because people want to stay at Disney. I think the Mall will be the same way. The kids aren't going to complain about the view when the family can walk down to the waterpark next door, probably being able to change in their swimming suits in their hotel rooms so no fooling around with lockers. If you care about the view from the hotel on vacation find a water view hotel on the beach someplace. It's not like a typical view of a parking lot from a hotel is much better.

* Having said that, yes, I'd like to see something more inspiring here than those office buildings. Maybe an indoor ski slope like American Dream? Maybe the Bass Pro shops they've been talking about for the past 20 years? I'm sure these are just back of napkin level sketches rather than serious proposals at this point.

* It's notable the parking ramp is being built with future conversion to other uses in mind should self-driving cars reduce the need for on-site parking.

* All the buildings are shown with skyways. People are going to use those rather than step outside into the snow to cross the street.
Maybe there's a place to build new urbanist "paradises" where people are forced to park a long ways away from the store and are forced to walk outside in the snow, ice, rain, cold, and sun just to get a cup of coffee. I don't think this is the place.

68351605_10157563265329875_3436763251789004800_o.jpg
* Here's an interesting comparison of the waterparks at West Edmonton vs American Dream vs Mall of America. Seems like AD and MOA have bigger overall pool areas, with the extra space at AD going to a lazy river and bigger pool while the MOA for more lounge chairs. Also MOA will have dual pools, presumably so they can only run one in non-peak times and only need to close one when there's a "guest illness".
You do not have the required permissions to view the files attached to this post.

This (paywalled) Business Journal article says the MOA water park is on hold.

This (paywalled) Business Journal article says the MOA water park is on hold.

Snippets from that article:

“The main focus of the water park work is to analyze what impacts the pandemic could have on the project. The uncertainty of both the timeline and severity of pandemic remains the biggest unknown,” the city released in a statement.

Mall of America Senior Vice President of Development Kurt Hagen said the mall’s biggest priority right now is planning a safe re-opening of the mall, but it still views the water park as a major part of its growth plans.

“We are still 100 percent committed to working closely with city officials to move this important project forward,” he wrote in an email. “Given the tremendous economic impact COVID-19 has had on the tourism, hospitality and retail industries [among so many others] we feel it is even more important that Mall of America continues to pursue this creative entertainment project."

MOA hasn't made full payments on its $1.2 billion mortgage the last 2 months.

Not looking great for our friends in New Jersey

Glad they mortgaged MOA to pay for that boondoggle...