"...the current applicant is proposing a conversion of the building into 48 residential units of supportive housing for formerly homeless single adults; each unit is approximately 400 square feet. The basement and first floor would also have a community room, bike storage, laundry facility, and shared workspace. Bimosedaa is applying for state and federal historic tax credits and therefore the project will also be reviewed by the Minnesota State Historic Preservation Office and National Park Service."

Would be renamed the Bimosedaa Building. First floor would become a lounge, with a lot of tenant amenities on the floor as described above. It's a bit disappointing that there's no effort to restore retail to this space, but it's not a huge deal. I can dream about the adjacent surface lot being someday redeveloped with a good anchor store.

On Thursday, the Minneapolis Downtown Improvement District (DID) started plastering heavily strolled sidewalks with signs directing people to the closest restroom. It’s part of the district’s mission to more than triple the number of public toilets, from 29 to 100. To do so, they will have to persuade hotels, restaurants, stores and other property owners to ditch the “restrooms for customers only” signs.

The new sidewalk signs on 1st Avenue, Hennepin Avenue, Nicollet Mall, 5th Street and 7th Street point out the nearest restroom, operating hours and estimated walking time. The district is also encouraging businesses to put up signs saying their toilets are for anyone.

I saw a few of these signs and wondered why I hadn't heard about it. I'm interested to see if it takes off.

The City of Minneapolis has just released an RFP for the Public Service Center Block. That's the block bounded by 3rd and 4th Streets, and 2nd and 3rd Avenues.

The city is looking to sell the two-thirds of the block that they own, which are currently occupied by the City of Lakes Building and the Public Service Center Building. Two nice examples of modernist office design, but both fairly low-scale and not particularly useful for current office-seekers. The RFP is in advance of the city vacating these offices in favor of the currently under-construction consolidated city office building. I imagine that this is the first of several dominoes to fall in this area. Hennepin County owns half of the block immediately to the west, and with their own consolidation looming, hopefully they will make that area available as well.

These parcels could be really transformative for the dead area between the Mill District and the Gateway District, and continue the development momentum from the latter (I can dream someday that the Wells Fargo and Gateway Ramp blocks get obliterated soon). This area is a huge part of the downtown "home-free zone" which is noticeably eroding. I expect, given that it's the trend, and hope that the development proposals for these lots will be primarily high density residential, and that the proposals contain (1) extensive ground floor commercial space, and (2) a minimum of three distinct buildings.

I decided to go the extra mile and get a shot of the CenturyLink crown removal for the out-of-town people. 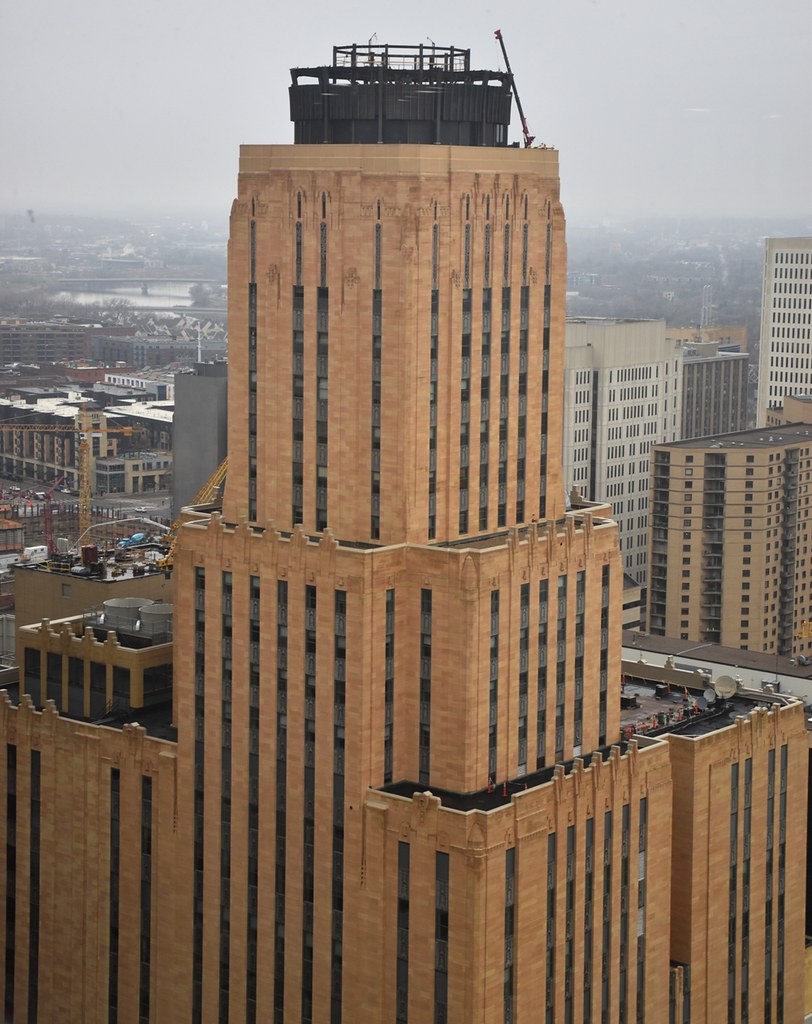 Wonder if they'll remove some of that screening around the top of the tower too.

On the first of the month, Minneapolis put out an RFP for Lot A in Cedar Riverside. This potential project has gotten a lot of media attention. CM Warsame, with the support of Mayor Frey, has proposed an African mall on the site, but some local business owners and apparently a group of local moms are angry about losing parking, and they shouted down the Councilmember at a summer meeting. There have been some accusations that the owner of Karmel Mall is behind some of this opposition, and I think it's pretty clear that Warsame wants this mall to be a competition with the Karmel Mall, but I have no way of knowing what's actually going on there.

Regardless, the city is proceeding. The RFP notes that this area is served by two LRT stations and there are 2,300 parking spaces in close proximity. Still, as a concession to these neighbors, the city says that it will prioritize developments that offer replacement parking. So much for a climate emergency, glad that issue was solved.

Aside from the "Africa Village" component, the city is hoping proposals will incorporate other complimentary uses, especially affordable housing, and reach at least ten stories. The city is also hoping for future buildings to meet high expectations for sustainability. Most interestingly, the city is doing a study on a future recreational and community center in Cedar Riverside, but this study will be completed next year, after this RFP is due. The RFP indicates a "strong preference for inclusion of 40,000-65,000 gross square feet of public/community space, plus associated parking, to accommodate possible colocation of a recreation/community center" and allows proposals to reserve that space but put off its design, pending the completion of that other study.

Along with the downtown service block RFP that I linked above, these are two really significant developments that the city is moving forward. Responses for this one are due January 10th.

The RFP's are due for the Public Service Center Block today. It'll be interesting to see what is proposed. I doubt it's anything too exciting, although the site has huge potential. The affordable housing requirements I'm afraid will hold back some developers. Any idea when proposals will leak out?

Are we talking about the Drake Hotel fire somewhere and I'm just missing it?

The building very much smells smoky, and all sides have blown out windows. 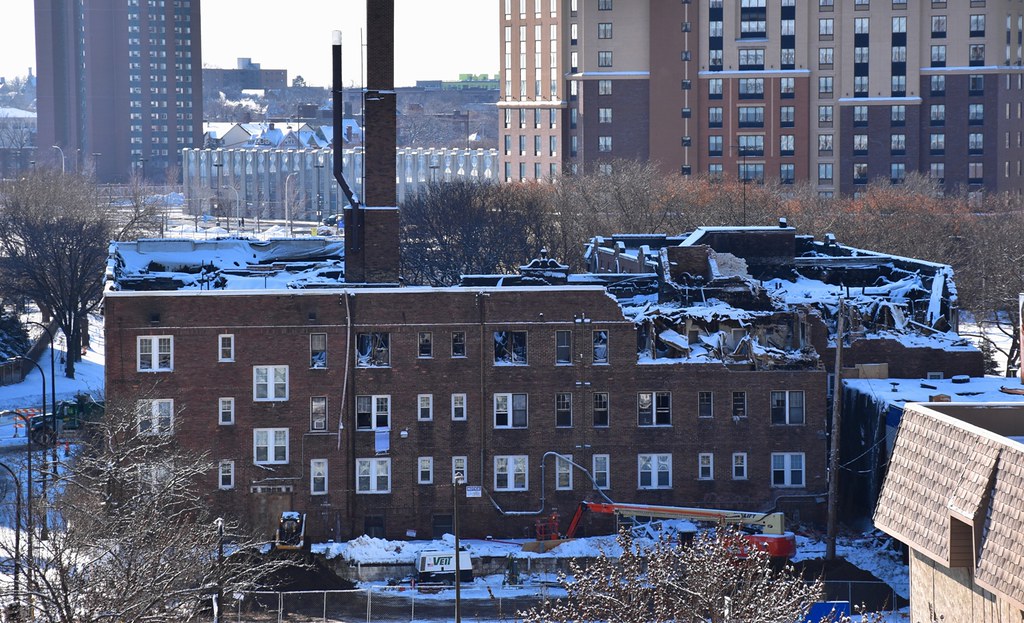 Anyone go to the DMNA meeting last night and see what the Service Center Block RFP proposals are? The little I've heard the main proposal seemed underwhelming.

I didn't go, but the meeting agenda showed one presentation for the one proposal bizjournals reported on.

Sounds like the company specializes on rehabbing historic buildings so it seems unlikely they will do a tear down. Done right they could really help bring some activity to this dead zone. Getting rid of the parking lot between the buildings for some green space and a restaurant patio would be great.

Both of these buildings are handsome artifacts of their period. We’ve lost the very best from this time, but one or both of these could be worth saving if they are handled well. Perhaps either a park or a slender new building could take over the parking lot.

Aren't they required to build something at least 10 stories on the land? I'm guessing there are some plans for the lot? (When the proposal is public and if something is actually being built this will need it's own thread?)

After they only received 1 proposal, that doesn't seem to meet the RFP, I wondered if they would cancel it and make some changes. Seems there was interest, but concerns too, which prevented more players from submitting.

After they only received 1 proposal, that doesn't seem to meet the RFP, I wondered if they would cancel it and make some changes. Seems there was interest, but concerns too, which prevented more players from submitting.

Seems like this would be prime land during the next boom.

The preliminary site plans basically showed a parking structure going in between the buildings with the current buildings just being made into housing with some retail added. I was really disappointed because this would be a prime spot for some mixed use with some office space. Even if it was just a mid-range (10-15 story) building I'd be a lot happier than what this proposal was.

Both of these buildings are handsome artifacts of their period. We’ve lost the very best from this time, but one or both of these could be worth saving if they are handled well. Perhaps either a park or a slender new building could take over the parking lot.

I'm with Luigi on this one. Even if these buildings don't rank as architectural treasures, they are good and pleasant reminders of their era. They're the sort of structures that we'll likely miss someday should they disappear now. Should the finances of renovation and redevelopment permit the reuse of the Public Services and City of Lakes buildings., there's still enough downtown land tied up in parking lots or ugly, underused buildings that there's no pressing need to destroy them.

These buildings have nice facades, but they have awful street presence in an area with no shortage of terrible ground-levels. With a good architect, new buildings on this site could re-use or interpret the style of the existing city buildings while adding life to the streetscape and more activity to the block. That's what should happen at least.

Either way, one response to the RFP is never good enough (especially for a block of this importance), and the city should reject that bid, figure out what went wrong, and reboot the process.

Neither options were all that impressive. It kinda seems like this is planned for a multi-phase development with the layout they presented. Tear stuff down in 10 years and put in a tower. Option 2 had the City of Lakes building completely gutted for parking. Both options called for demolition of 217 S 3rd St, and replacing it with a parking garage. No first floor activation for the parking garage either. I think for this to be a police precinct would be the wrong move.

Sidenote though. It seems like the time left on the Wells Fargo data center may be limited. Looks like there are eyes on it for redevelopment.

Sidenote though. It seems like the time left on the Wells Fargo data center may be limited. Looks like there are eyes on it for redevelopment.

Dear god I hope so. That place hits the terrible design bingo. No street-level activation, not even windows. One door, set way back from the corner. Parking garage entrances interrupting the sidewalks around it. I know people often say "anything is better than a surface parking lot", but I honestly think that building is worse than a parking lot.
Post Reply
1802 posts