Council Member Bender introduced off street parking ordinance adjustments in City Council meeting and referred the proposed changes to Z&P. Any insight to what changes have been proposed?

This would be a big win for the city if approved. Lets get lobbying our council members!

This would be a huge win.

Of course, a certain contrarian group FMP loves to hate on highlighted this study from Portland a few years ago: http://www.oregonlive.com/front-porch/i ... se_in.html

Portland had no parking minimums in some districts (much more expansive than Mpls downtown only) since the 1980s. But the recent surge in development, with roughly half of the units having no parking, caused neighborhood concern. A study was conducted, and they actually went back and amended the zoning to add back parking mins. Sounds like a total win for the pro-parking crowd, right?

Well.. what Portland reversed to is still way more progressive than ours. In most multi-family structures, it breaks out as minimum of 0 for 1 to 30 units, 0.2 per unit for 31-40 units, 0.25 per unit for 41-50 units, and 0.33 per unit for 51+ units. That's still pretty darn good. They also have all sorts of reductions, including on-site car sharing, bike parking, nearby bike-share stations, development that builds transit plazas along transit streets - all of which can reduce the minimum by no more than 50%.

Non-resi minimums seem similar to ours (without doing a direct comparison), but they do allow for joint-parking between nearby uses (which includes up to 500' from the site) when an analysis shows peak parking demand occurs at different times of the day.

Beyond all that, I'm really not sure how the survey they did truly supports the move back to a graduated parking minimum approach. Given the expansion of car sharing services, bike facility improvements, and existing user travel patterns it seemed like simply pricing the street was the best option. 24% of HHs didn't own a car, and a bunch of those who did and parked on-street didn't even use it to commute (only 36% do). Of all people who owned cars (including those who commuted by them), the majority made 10 or fewer round trips a week (the percents don't add up to 100 for that question, but it was 69%), with 51% making 5 or fewer. All that is to say it really seems like people are owning cars but aren't willing to pay for parking in their building. Price the street and many of those folks might just choose to not buy/bring a car with them.

Anyway. The current Portland model would be a definite shift toward a more market-supportive environment. I would wholeheartedly support a pragmatic approach where they implement a graduated approach like PDX currently has but ALSO pair it with some public parking prices (a mix of permits, meters, etc by neighborhood). Thinking long-term, maybe every 10 years or so they can chop off the bottom-rung of required parking. ie in 2025 remove the 0.2 space requirement for 31-40 units, etc etc.

Hey now I've been clean for like a month now.
I get all my anti-development hysteria filtered through MRRSVLD and @WedgeLive.
Peter Bajurny
peter@bajurny.us
@FISHMANPET

Sounds like Portland just needs to get better at pricing their on-street parking.

Anyone else see this? www.facebook.com/mplsparking

Yeah, Portland's parking problems have always struck me as a problem of pricing, not supply. As if people are shocked that residents are just dumping their cars on the street for days at a time when there's no reason not to.

I've owned a cheap piece of junk car, and at my comfortable income level it was pretty easy to keep around. Even when I got my new car, I kept it around for a few months because I could never quite find the time to dispose of it. It was the inconvenience of a snow emergency that finally made me ditch the old car.
Peter Bajurny
peter@bajurny.us
@FISHMANPET

Anyone else been playing around with this map from MinnPost?

It's crazy how expansive the Lake Street corridor is, compared to basically every other commercial district zoning in the city.

Yeah, I spent a little time looking for pockets with 7 acres of contiguous commercial property that would qualify for a liquor license.

If you can figure out how to put a liquor store on 38th Street (literally anywhere along the corridor), you'll be a rich man.

Looks like Lyndale & 26th or 27th is still good to go (the church buffer has since shrunk with Greenleaf apts going in at 28th). If Heyday goes under, GET IN THERE!

EDIT: Or were you actually talking about on-sale hard liquor, instead of off-sale (liquor store)? Which requires the 7 acres of contiguous commercial zoning?

Yes, I was talking about on-sale booze.

So on-sale liquor (a bar) requires the 7 acres of commercial zoning. What about off-sale (liquor store)? Is there a similar requirement there? Or is it just the 2000' spacing from other stores, X feet from schools, etc.?

Surely someone would have figured out how to open a store south of Lake Street by now if it were just the spacing reqs, right?

That C2+ thing really shows the failure of euclidian use-based zoning. There's not a single place along 38th Street other than Hiawatha where a liquor store would fit in?

It's totally weird to me that the "Euclid" in "euclidian zoning," a zoning form that to me is represented by segmenting a map into various shapes, is a town named Euclid, not Euclid the father of geometry (aka math of shapes).
Peter Bajurny
peter@bajurny.us
@FISHMANPET

At the average growth rate since 2010, Minneapolis would hit 500k by the middle of 2026. I'm not claiming the growth will continue or that 500k is a laudable goal, just saying.

With a hat tip to another thread, I'll note that Minneapolis has had 500k with far fewer apartment buildings and far less density.

Given that, how do we change the rules so we can keep the current growth rate going even if new constructions slows down? ADUs help but I'd really like to see rules around rooming houses and unrelated residents relaxed or eliminated. What other kinds of things would help us better reuse existing structures?

I'd like to see major relaxation of zoning. Having looked at properties for sale, the patchwork of zoning along our commercial corridors is completely ridiculous and based on the land use long ago when the zoning was implemented.

Example: I've run the numbers for a few potential developments, two being former auto service type uses. As such, they are C2 (in neighborhoods largely R1A) and as such can have higher FAR etc. But these sites often have a large unknown remediation risk that makes it unappealing for small-time developers (oil changes and radiator flushes for a half century create risks, ya know). But then you'll find a site next door or down the block, usually closer yet to the node in question, and it's C1 because of the original land use. So that means there's a lower allowed FAR and many more restrictions on allowable uses, meaning it's much harder to make the numbers pencil to build some small-scale infill mixed use.

Zoom in to your neighborhood node or transit corridor on this map, and tell me if there's any rhyme or reason behind the parcel-specific zoning. http://www.minnpost.com/data/2015/02/ho ... olis-zoned

I think I'd be a lot more supportive of the whole idea of "zoning" if that map looked a lot more rational. Take my 'hood: 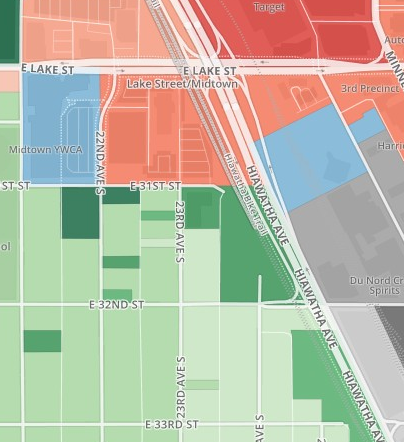 What possible rationale could there be for R1A (the lightest green) this close to a light rail station? Why is there one lot of R1A in the R2B (slightly darker green) block, and vice versa? Why is R5 acceptable next to R1A, or for that matter why is R5 acceptable where it is, but not across the street where it is currently zoned R1A?

Basically, zoning for what exists is silly. And I think we absolutely need rooming houses back. If we have these huge houses that supported families of 10 around the city, we should very easily be able to adapt them to house 10 unrelated individuals.
Peter Bajurny
peter@bajurny.us
@FISHMANPET

Before we start allowing rooming houses and cramming more people into existing structures, I'd like to see every possible attempt made to encourage infill development. There's still acres of vacant lots downtown and throughout the city and I don't think its unreasonable to say Minneapolis could hit 500k just by developing those lots in the context of their surroundings. Yes I know small-scale infill is hard to do and has been the city's goal since forever.

I give up on trying to moderate the two separate threads dealing with population growth.

We've always had one to specifically discuss Minneapolis (prompted by "500k", density, etc.) and another to discuss the Census and Met Council's decennial projections in the 7-county area. Somehow, those discussions have never really overlapped much before today. Today I feel like you guys are purposely posting things in the wrong thread