I was inspired to collect some of the greatest examples of Desire Paths. If you have some photos, please share them. Extreme. Obvious. Egregious. Simple. Here's an extreme one.

And here's one I came across, desire so strong it was shoveled: 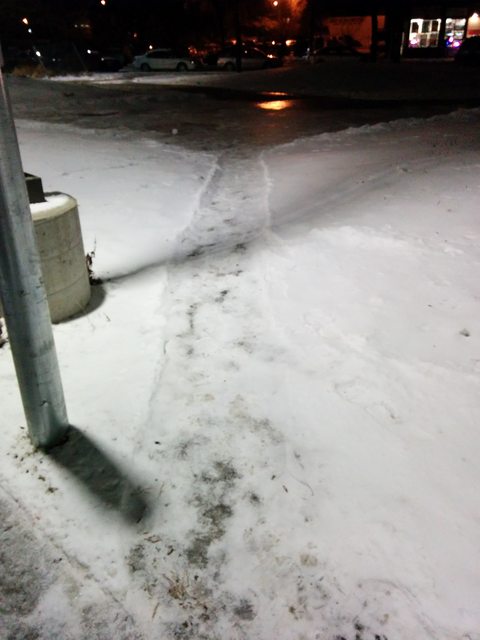 This was somewhere in the maze between Cedar Ave and the Cedar Ave LRT station.
Last edited by FISHMANPET on March 31st, 2015, 2:06 pm, edited 1 time in total.
Peter Bajurny
peter@bajurny.us
@FISHMANPET

There's a prominent one through East Phillips Park between Franklin and E 19th:

The middle section is the most prominent in Google Maps, but the desire path underneath the trees in the lower left of the park looks very similar to the one branching around the bushes at the NE building's cul-de-sac. The dirt has been worn down to a significant rut, and it's there all winter.

Here's one at my school! The city has talked about finally doing something about it.. 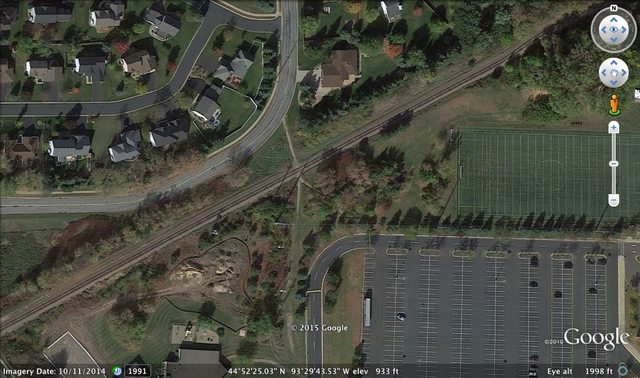 That's the St. Paul Subdivision, but yeah, there's usually a path there. I think the fence on the Bandana Square side got repaired late last year to fix the hole and block the path, so I'm not sure of the current status.

There are multiple desire paths across those tracks. Here's one at Energy Park Drive and the UMN Transitway connecting to Langford Park. There used to be a roadway underpass there decades ago.

Another path crosses the tracks right by Snelling Ave, going from the Oscar Johnson Arena up to the Snelling service road.

Along Energy Park Drive itself, there's a pronounced line where there should be a sidewalk -- not exactly a "desire line", but shows that there's a decent amount of foot traffic. That will probably fade a lot now that the Saints will be playing in Lowertown instead.

There are some decent desire lines by Guitar Center in Roseville. Also a "desire sidewalk" just southeast of there along the north side of County B2 between the sets of Snelling on/off ramps.
Mike Hicks
https://hizeph400.blogspot.com/

Oh, there's also this path across the very eastern end of I-394 just before it reaches Washington Ave. It connects the alleys on either side of the highway.
Mike Hicks
https://hizeph400.blogspot.com/

Also, speaking of Franklin, this section of 20th Ave between 94 and Franklin Ave: 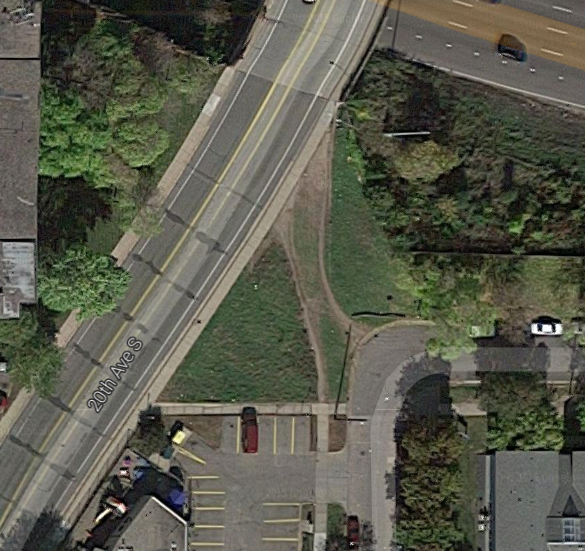 For some reason both N-S roads there are 20th Ave S, so the desire path is connecting 20th to... itself!
Peter Bajurny
peter@bajurny.us
@FISHMANPET

I suppose the unspoken message here is that where there's a desire path, there should probably be a sidewalk. And that's certainly true in a number of these cases.

I would point out, though, that in a number of other instances (and you can't tell from Google maps), the topography is altogether too steep for a sidewalk, and stairs are frowned upon, so mountain goat paths may have to do.

There's a desire path through our neighbor's front lawn to get from the sidewalk to the concrete along the side of our house.

Or at least there wlll be eventually.

I can testify to the path south of the Knollwood target as I have seen people running across Hy 7 risking their lives there many times.

When the Cowboy Jacks in Bloomington is very busy, and you can't fit your car in the parking lot, people park at Rainbow to the east and walk up the steep dirt hill to Cowboy Jacks. There is a nice path worn into the dirt now.

I cannot verify via satellite image, but when I golfed Columbia on Saturday, groups of teens were walking through the course.

There used to be some epic parties out there.
Q. What, what? A. In da butt.

Pair of paths in my neighborhood, along the Cedar Lake Regional Trail. This first one is a path between the two halves of the cluster of properties of Edco. The path seen in the upper left corner of the image is used by the employees who walk across the rail/trail between each half of the Edco "campus".

This second one connects the 42 Hoops youth basketball (with the triangular parking lot in the upper left) to the Hardee's (in the lower right). Cheap fast food and youth sports, difficult to keep them apart.

Hoops to Hardee's desire path by xeoth, on Flickr

That's the St. Paul Subdivision, but yeah, there's usually a path there. I think the fence on the Bandana Square side got repaired late last year to fix the hole and block the path, so I'm not sure of the current status

I live on the south side of the fence and you are right that the fence was repaired. However, someone cut it open again already so the path is good for use again.

^ Didn't Bill Lindeke or Andy Sturdevant write a post about the Hamline passage a while back?

Bill's post from a few years ago is here. He missed a paved path that lets you get most of the way across without needing to cut across parking lots or landscaping, but it's difficult to find unless you look at a map first.

I'd like to see the city put in a pedestrian bridge near here. One good option would be to extend the skyway that connects the main Bandana Square building with its parking structure -- it would let people use that ramp when going to sports events at McMurray Field.
Mike Hicks
https://hizeph400.blogspot.com/

Regarding the first item in this thread for MN-7, I'm surprised how high up the embankment is for the highway -- there must be enough clearance for a pedestrian tunnel, though it would probably be more effective to make a proper set of connections to the Cedar Lake Trail that runs just west of there. The podded layouts of the apartments/townhomes and the fence barriers between them make that basically the only place people can access the trail. Looks like a lot of people follow the fence back to the trail, but a few decide to climb over the highway instead.

Back when we were still debating SWLRT freight reroute options for Twin Cities & Western, I had thought about putting the freight line back onto the Cedar Lake trail and creating a new bike path that followed the street layout more closely.

If Highway 7 continues to get new interchanges in the future, it might be possible to build another trail that dips under the bridge that crosses Minnehaha Creek. As it stands today, there probably isn't enough clearance to do that.
Mike Hicks
https://hizeph400.blogspot.com/

I'm not sure if this is a desire path or a maintained path in limbo. It shows up on Google Maps but not on Shoreview's trail map. Anyway, I always enjoy a clearly ignored "no trespassing" sign.