I saw this on FB and thought it was super interesting. The continued work on Randolph Avenue in Saint Paul revealed the old street underneath the overlayments in its entirety, which is really unusual. They just lifted the later pavements off. (images of the innocent reacted) 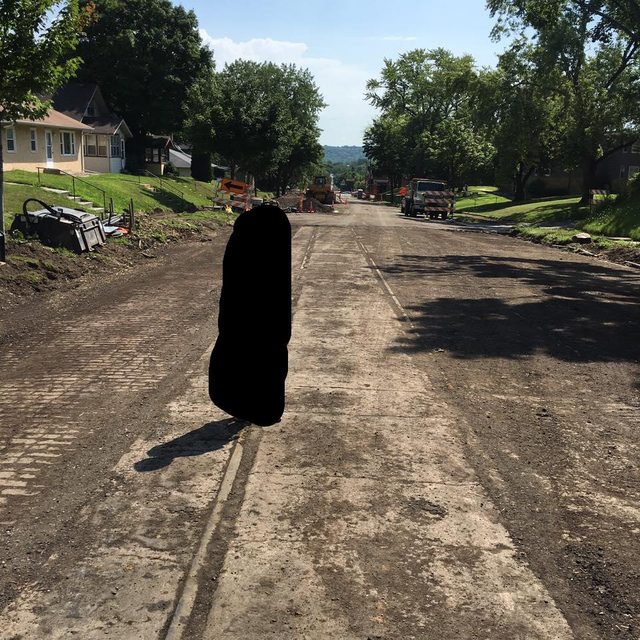 Nice shot of the old streetcar right-of-way more or less intact. I've been unable to get a photo of the street in this state, before they come through and dig that all up too, which I presume will happen here shortly.

I've been a bit conflicted seeing the Randolph reconstruction results -- I think the new roadway is narrower, with more grassy boulevard space added between the street surface and the sidewalk. It makes it nicer to walk along/across the street, but it means a more complex build if anyone ever tried rail transit again.
Mike Hicks
https://hizeph400.blogspot.com/

I'm conflicted about the presence of dark specters haunting our infrastructure projects.

I for one welcome our new dark specter overlords.

Since we're talking about how Scott County has gotten away with all their new interchanges rather than be a part of CTIB, here's another gem from the past few days:

- A new freeway interchange will be built at US 169 and MN 41 between Shakopee and Chaska.
- This will be funded with a $17.7M TIGER grant from USDOT.
- TIGER categorizes this as a "rural project."
- The name of the project is "US 169 Freight Mobility Project."

There's a serious reckoning coming for all the historic Milwaukee Road bridges. This is the worst, but they're all going to start approaching their end of life in the next decade or two without serious maintenance.

The article notes that the most "fiscally responsible" thing to do is replace the bridge(s) entirely. I don't have a problem with that, as long as (a) some of the original bridges remain (esp. a contiguous stretch of several, e.g. between Lyndale -> Nicollet) and (b) the replacement bridges maintain some of the features of the original bridges, NOT like the newer bridge at Park, which narrows the cut and has only a single span.

They're changing the signs and stripes on 394's MNPass lanes. Are they also changing the rules? Can I still reverse commute for free in those lanes?

Since we're talking about how Scott County has gotten away with all their new interchanges rather than be a part of CTIB, here's another gem from the past few days:

- A new freeway interchange will be built at US 169 and MN 41 between Shakopee and Chaska.
- This will be funded with a $17.7M TIGER grant from USDOT.
- TIGER categorizes this as a "rural project."
- The name of the project is "US 169 Freight Mobility Project."

Funding sources aside, this is probably the only stoplight on 169 between Anoka and St. Peter, right? So all in all, a pretty easily justified project.

Jordan, MN has one still (I think).

Jordan, MN has one still (I think).

Drove through it about a month ago. Can confirm.

Yeah, I think that you're right. But the point still stands.

Just to balance things out, since I was complaining about the 169/41 interchange (though it was really about how it was funded and sold to the public, rather than the interchange itself)...

I present to you, a map I made 5 to 10 years ago for a freeway connector between 94 and 10 on the south side of St. Cloud.
https://www.google.com/maps/d/viewer?mi ... sp=sharing

This would:
- Take the place of the (planned but not programmed) 94-10 Clearwater freeway connection.
- Provide a bypass routing for MN-23, which is a regional expressway on both sides of St. Cloud but painfully slow through the stroady core.
- Provide connectivity for a (planned but not programmed) midfield terminal at STC airport, should it ever become a more significant reliever airport.
- Make use of the existing Travel Information Center just east of St. Cloud on Hwy 10.

And yes, I know it cuts through an industrial park near the CR 75 exit in St. Cloud. That didn't exist when I first made this long ago.

Sounds like a good interchange project to me. Have you ever seen how immobile the trucks are once they get stopped at the horrific congestion at that signal? The signal at Jordan will be taken care of with CTIB opt-out funds.

For those that don't know, St. Cloud has long wanted a new bridge in the area and were really pushing for that as an option for the new freeway connector, except it would have been a bit farther north. Mn/DOT said no because it was the least effective at their goal at moving traffic between I-94 and US 10 so St. Cloud has been half-halfheartedly pursuing building a surface street connection rather than a freeway themselves.
http://www.stcloudapo.org/uploads/1/2/8 ... coping.pdf

Boo to concrete streets for residential blocks. *ga-gunk ga-gunk ga-gunk* is what I hear all day long at my house. It's more of a nuisance than noise generated by nearby Hiawatha Av and LRT combined (which aren't really a nuisance). If and when my street is ever reconstructed (probably never), I really hope they do not stick with concrete.

Also, 2,500 AADT is fairly annoying in and of itself. Even though I did check the numbers online, for some reason that didn't jump out at me as being "too high" to stop me from buying a home. It's far from being unlivable, as traffic is light when it truly matters (at night), but man I didn't realize that nearby "normal" residential streets in low-density areas carry only ~200-500 AADT. So I guess shame on me for that.

Aesthetically, though, I think concrete is a much more attractive finish for any street -- not least of which residential. (Edina residents put up a fight a couple years ago when the city wanted to reconstruct their concrete to asphalt.) Added cost probably doesn't justify itself for a low-volume street, but I think it's an option that should be available to assessed homeowners, as long as the city has the capacity to maintain both (which Mpls does).

Is yours in really bad shape, or is this just relatively new concrete, twincitizen?

Aesthetics really shouldn't be a primary motivator for a street surface though, right? Driveways and parking areas should be concrete, because things can sink into asphalt on hot days and it's not pleasant to lie on asphalt if you need to get under your car for something. But for road surfaces, asphalt is often a better choice - while asphalt is more likely to pit and crumble, it's cheaper and easier to fix when that happens, and chip resurfacing is extremely efficient. Concrete is up to ten times harder than asphalt, which again is a benefit for driveways and parking areas but relatively unimportant for roads.

Finally, and a bit off topic, asphalt is a much better surface for pedestrians, especially runners - the additional give makes it easier on the joints and feet, which is the primary reason that you'll see runners running on the bike trails when there's a concrete pedestrian sidewalk right next to it. I don't know why the MPRB hasn't figured this out yet, but they go to the trouble of putting down concrete sidewalks right next to asphalt bike paths, when the heaviest-volume potential users of the pedestrian paths would universally prefer asphalt.

Yeah, if MPRB is going to continue doing one concrete path and one asphalt path, it would be nice if the asphalt was for peds and the concrete was for bikes.
Joey Senkyr
joey.senkyr@outlook.com

As a pedestrian, I've never noticed a meaningful difference between walking on concrete and walking on asphalt. For running, yeah (although I almost never run).

I wonder if runners are a large part of footpath than walkers. On a nice weekend day, it doesn't seem like it. But runner go out and run every day, so maybe.

Of course, asphalt is better for bikes too, and since it's cheaper, just do both asphalt.
Post Reply
1116 posts