My understanding is that (unlike in, say, the bedroom in your house), the requirement for a window in a bedroom in a large, fire-sprinklered multifamily project isn't driven by a fire egress issue, but rather for access to daylight and air.

It would have to be, right? I mean, once you're more than 2-3 stories up, a window isn't really any more of an emergency exit than a solid wall is.
Joey Senkyr
joey.senkyr@outlook.com

Actually, the code is written for 'light & air'. In a remodel, the specifics are:

Natural light and ventilation requirements: a minimum of 8% of the floor area of each bedroom
must be provided in window glass area. Natural ventilation shall be through windows, doors,
louvers or other approved openings to the outdoor air. Such openings shall be provided with
ready access or shall otherwise be readily controllable by the building occupants. The
minimum open able area to the outdoors shall be 4 percent of the floor area being ventilated.
For example, a bedroom having an overall floor area of 160 square feet must have:
160 sq.ft. x .08 = 12.8 sq.ft. of glass area, and 160 sq. ft. x .04 = 6.4ft must be openable.
Natural ventilation exception: A mechanical ventilation system capable of providing 0.35 air
change per hour in the room or a whole-house mechanical ventilation system is installed
capable of supplying outdoor ventilation air of 15 cubic feet per minute per occupant on the
basis of two occupants for the first bedroom and one occupant per each additional bedroom.
Natural light exception: artificial light capable of producing an average illumination of 6 footcandles
over the area of the room at a height of 30 inches above the floor level.

I like the red accents. They did a good job of using numerous cladding materials on this one without looking really tacky. 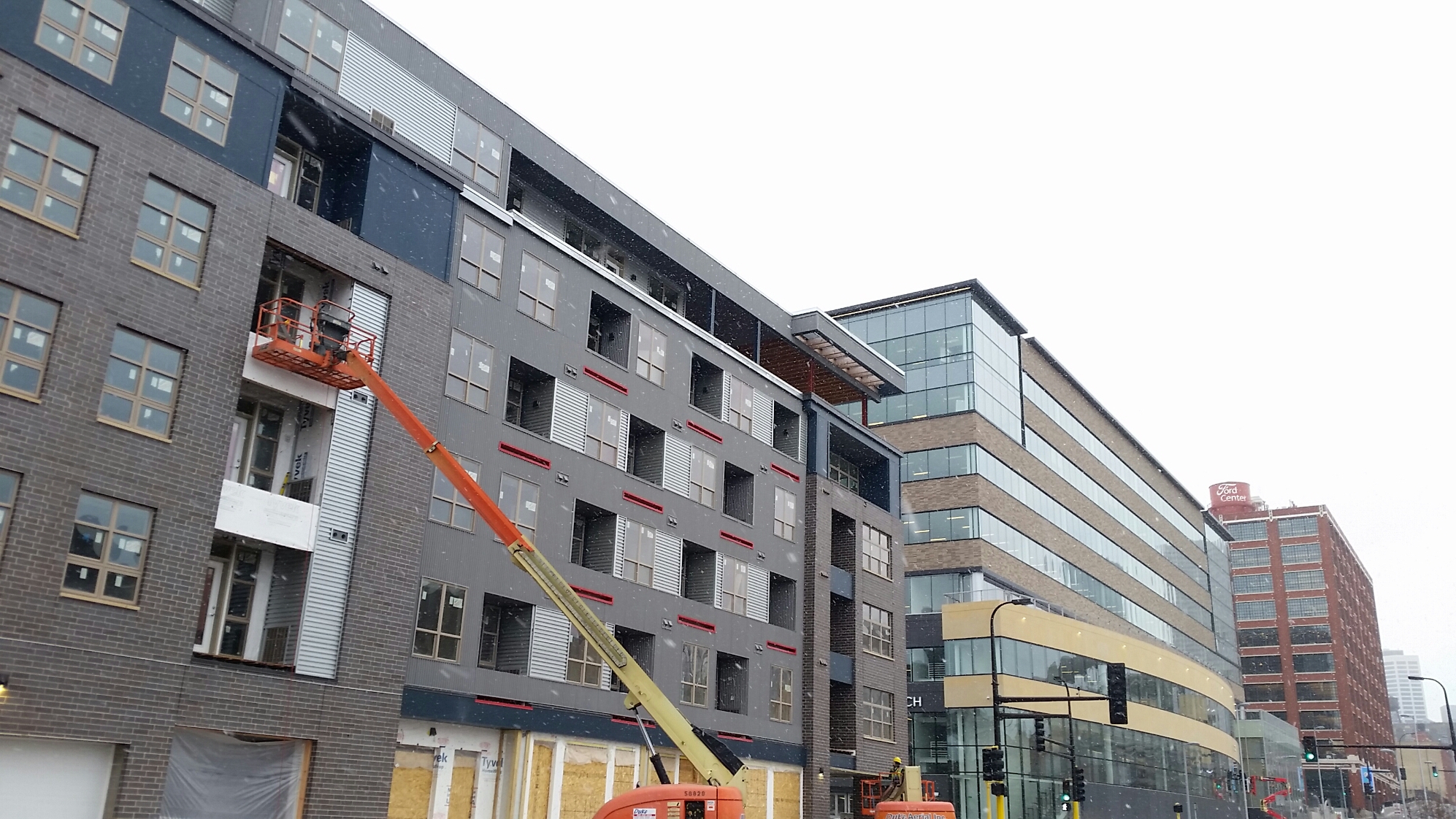 I don't understand why we're stuck with peel-and-stick window syndrome on nearly every project. How hard is it to a) set the window further back in the masonry opening or b) keep it flush but apply some beefy trim?

Well these are set back into masonry where there is masonry on the project, they used real full veneer brick, so that's good, but I do agree that the windows could use some more architectural definition on this and other projects when set in metal panels or other sidings.

I don't understand why we're stuck with peel-and-stick window syndrome on nearly every project. How hard is it to a) set the window further back in the masonry opening


or b) keep it flush but apply some beefy trim?

$ x each window (this is used a fair amount)

Well worth it if you ask me, but maybe not for rentals.

It's soooo easy to spend other peoples money isn't it? It's all about cost vs return. If they can save a few bucks here and there, guess what? More money in their pockets.

It's soooo easy to spend other peoples money isn't it? It's all about cost vs return. If they can save a few bucks here and there, guess what? More money in their pockets.

I guess I'm saying, as a potential buyer, I'd gladly pay the extra $$ for better windows/framing. So in that case it's me whose spending the money, but yeah, the developer has to take the risk that the market wants that product. Nobody wants a home that looks cheap.

So does anyone know what the holdup has been with this place? I don't think anyone has moved in yet?! I live at Junction Flats and never see any lights in the rooms (except for one that is probably "staged")...did they not pass inspection or something?

I spoke with one of the leasing agents in our building (Junction Flats) regarding District 600 across the street and how it hasn't opened for tenants yet. She indicated that it isn't going to anytime soon. Apparently the developer wanted to sell it but is having issues finding a buyer as all buyers are concerned about ongoing issues because of how it was constructed and the issues they ran into during construction.

That might be true but I'd think there would be a management company out there someplace that would at least handle renting the property so that the developer could get SOME money back on their investment.

The website has been taken down as well. Interesting.

Reminder: this started construction in June 2013 and was originally supposed to open in fall 2014.

I did call the phone number I found for them and was able to leave a message but haven't gotten any kind of callback. I indicated we were very interested in apartments (we actually were), but no response at all.

As a side note - a few weeks ago the door to the "lobby" area was unlocked on a Sunday morning so I walked into the building. Also, the door to the elevators wasn't completely closed either so I had full access to the building. Everything looks good inside and is completely finished. I was able to look into a unit and also the party/club room on the top floor. Just don't understand why whoever currently owns it doesn't at least get some tenants in there?

As someone who lives in the immediate area, I may be able to provide a little insight.

Nobody has moved into the building yet because the city has yet to grant them a Certificate of Occupancy (CO). Until they get that, it would be illegal for them to allow anyone to live there. The city is withholding the CO because of numerous problems with the building itself. That much I know is a fact.

As to what the city's problems are with the building, I have no confirmation of this, but the general consensus among us neighbors is that they are taking on huge amounts of water in the sub-level parking garages and haven't been able to fix it. I'm no engineer, but maybe going down two full sub-floors in the middle of the old Bassett Creek wetlands without a good plan for dealing with moisture isn't such a fantastic idea?

I'm seriously beginning to doubt that anyone will ever live in that building.

Well I'm sure just about anything can be fixed (and probably for way less than the expense of tearing it down, along with the loss of $$$ just dumped into the project). I did see they have had a few permits in regards to fixing a broken drain line (that has since been cleared). Also looks like an open permit regarding some unused plumbing openings that need to be corrected.

There was that building near Calhoun that had a similar problem. Didn't they eventually fill in the bottom layer of parking, if I'm not mistaken?

Wonder if that's an option here.

Anyone know anything new about this property? I see there's a new banner on the side of the building along 5th St (up high), but their website still isn't in place. I wouldn't be surprised if squatters try and get in somehow - it's a prime building for that to happen in...